In Venice, at the mouth of the Grand Canal, the Basilica di Santa Maria Della Salute stands clear and imposing on the landscape of the city.

It is one of the most beautiful and great churches of all of Venice and it is a testimony to the grateful love of the Venetians to the Madonna, who liberated them from the contagion of the plague in 1630.

So the city of Venice decided to build a church to the Virgin Mary as a sign of gratitude.

This huge sacred building with its gigantic dome was erected on over 100,000 wooden poles and every visitor can see it already from Piazza San Marco.

Unfortunately only a few of these visitors take the time to cross over the canal and go on the other side, to visit the interior of this beautiful church.

On the steps of the entrance of Santa Maria della Salute you can, in fact, enjoy a spectacular view of the center of Venice: Piazza San Marco, the Palazzo Ducale, the Basilica di San Marco and the Campanile can all be spotted from here with a different perspective, but no less fascinating!

If you have the good fortune to visit Venice during the period of November 21st, you can attend the annual Festa della Madonna della Salute, (Feast of Our Lady of Health), during which thousands of Venetians go on pilgrimage to the Basilica to ask the Virgin to protect them from diseases and accidents.  On this occasion an especially built floating bridge crosses the Grand Canal, so that Venetians can travel to the other side to pray. 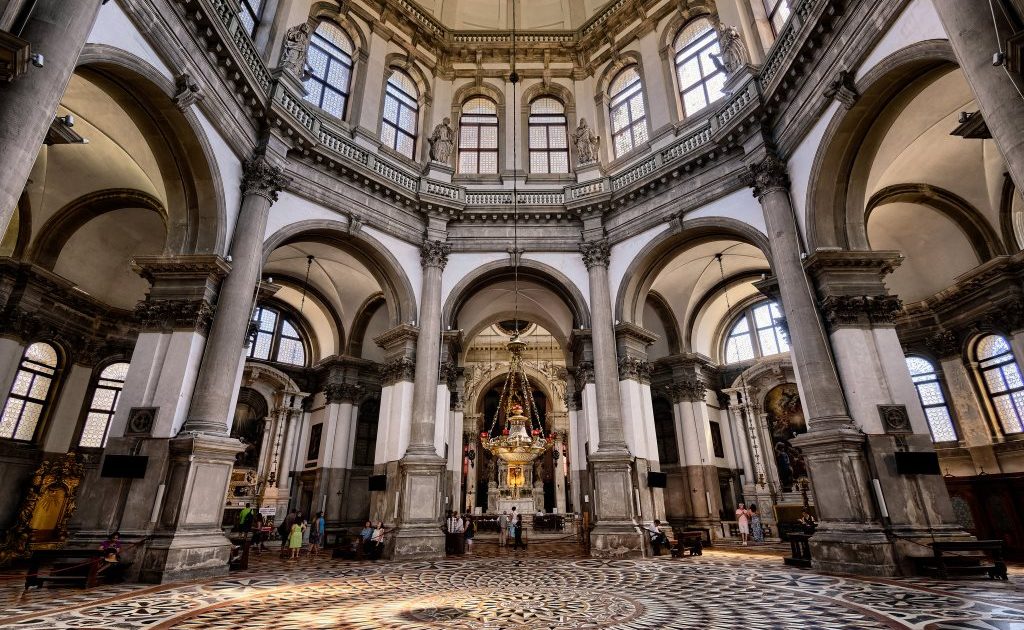 Holiness and commemoration: these are the two deepest feelings that you can live and breathe crossing the door of this church.

On the day of the feast of Our Lady of Health, the city and its citizens are combined to attend the sacred and timeless act of gratitude at this place.

Cardinal Giuseppe Roncalli, who was elected Pope at the end of October 1958, now Blessed John XXIII, in a message to all the Venetians, thus reveals his devotion to Our Lady of Health:

« For five consecutive years, we had the special favor of participating with you and to preside at the annual celebrations of Our Lady of Health, which is related to the vote expressed by your fathers in 1630, in the painful circumstances of a nefarious disease….

Since the dawn of this morning we come contemplating in spirit your festive and prompt pilgrimage to the great temple of Salute, here from this sacred Vatican Hill, which at the end of the month dedicated to the devotion of the Rosary brought upon us the merciful goodness of the Lord ».

This tribute to the Virgin plays a key role in the religious life of Catholic Venice.

The attention of those, who are approaching the Serenissima from the sea, is immediately captured by the Basilica of Santa Maria della Salute, whose immense dome stands on a tiny island, nestled between the San Marco Basin and the Grand Canal. 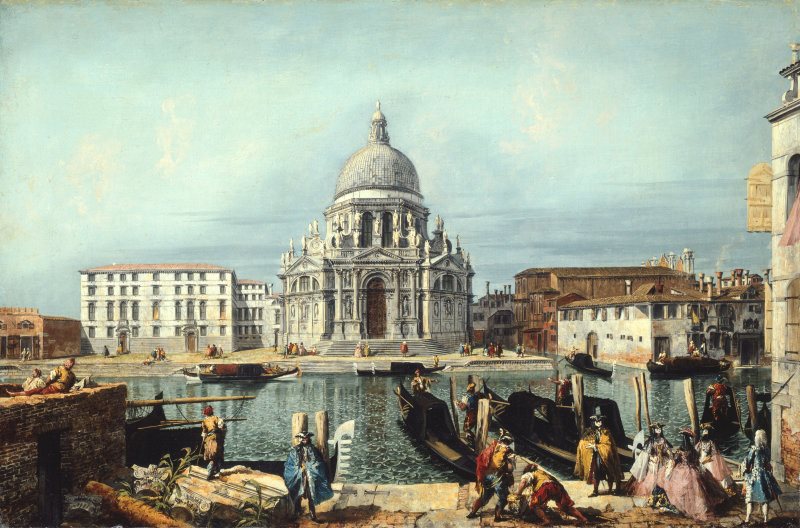 The elegant basilica is dedicated, precisely, to the Virgin Mary and contains extraordinary examples of religious art, among which stands out paintings by Tintoretto and Titian, and it is affectionately called “The Salute” by the Venetian citizens.

Established in 1630 to pray that Our Lady would put an end to the scourge of the plague, the construction of the basilica took no less than 57 years, because of the difficult terrain on which it rests, consisting of muddy embankments.

To stabilise the structure several thousands piles of wood were used, while the eight sides of the exterior facade owe their refined appearance to a combination of stones coming from Istria and marmorino (brick covered with a mixture of marble dust and lime).

You can admire the statues of the four evangelists that dominate the main façade and the elegant figure of the Virgin, which protects the city from the pediment.

The building’s architecture is rich in symbolism alluding to the Virgin Mary: the dome represents her crown, and the inside of the church represents her womb.

In the local political-religious symbolism, Venice was always associated with the Madonna. In the dark days of the siege of 1509, for example, the Doge Leonardo Loredan called the city “inviolable virgin among the lagoons”.

Once inside, everyone should dedicate a few moments to the Byzantine statue of the Madonna with child on the main altar, and turn the gaze upward to see the ceilings painted by Titian, depicting biblical scenes.

Venice has been victim of the plague in various occasions, being a port and a city of merchants.

But that of 1630 was a particularly violent episode.

Venice was a desolate spectacle of that: the quarantine hospitals scattered around the islands were unable to contain the plague victims, which therefore remained in the homes, most often without doctors, since those remaining were insufficient for such an intense service. The early medicines were soon depleted, and even the food reserves were lacking.

Even the dead could not find a decent burial and remained abandoned on the streets, increasing the contagion among the living.

On 26th October 1630, the Doge, in the name of Venice, took a pledge: to build a church dedicated to the Vergin Mary of Our Health and that every year, on the same day which the city would have been declared cleared of the plague, the all city would go and pray in the church to thank Mary for the deliverance of the plague.

Baldassarre Longhena was chosen as the architect and on 1st April 1631, despite the Doge’s disease, the first stone was blessed. But the construction, which began only in 1633, continued for a long time: in 1653 the church was opened for worship, but it was only solemnly consecrated on November 9, 1687, when the works were finished.

“A round machine as no one has ever seen”. This is how Longhena proudly presented his project.

Longhena, who will not have the consolation of seeing the finished work, because he died aged 86 in 1682, created a true masterpiece, one of the most beautiful and imaginative works of Baroque architecture.

The Basilica of Santa Maria della Salute is located on the Grand Canal, just where the canal flows into the Bacino di San Marco, and is easily reached by water. The church is open every day and access is free, but expect to pay a small fee to visit the sacristy.

Want to join the discussion?
Feel free to contribute!

This site uses Akismet to reduce spam. Learn how your comment data is processed.

Subscribe to the GW Newsletter to receive our Special Offers & News

How to celebrate Halloween 2016 in Venice with events and parties

This site uses cookies. By continuing to browse the site, you are agreeing to our use of cookies.

We may request cookies to be set on your device. We use cookies to let us know when you visit our websites, how you interact with us, to enrich your user experience, and to customize your relationship with our website.

Click on the different category headings to find out more. You can also change some of your preferences. Note that blocking some types of cookies may impact your experience on our websites and the services we are able to offer.

These cookies are strictly necessary to provide you with services available through our website and to use some of its features.

Because these cookies are strictly necessary to deliver the website, you cannot refuse them without impacting how our site functions. You can block or delete them by changing your browser settings and force blocking all cookies on this website.

These cookies collect information that is used either in aggregate form to help us understand how our website is being used or how effective our marketing campaigns are, or to help us customize our website and application for you in order to enhance your experience.

If you do not want that we track your visist to our site you can disable tracking in your browser here:

We also use different external services like Google Webfonts, Google Maps and external Video providers. Since these providers may collect personal data like your IP address we allow you to block them here. Please be aware that this might heavily reduce the functionality and appearance of our site. Changes will take effect once you reload the page.